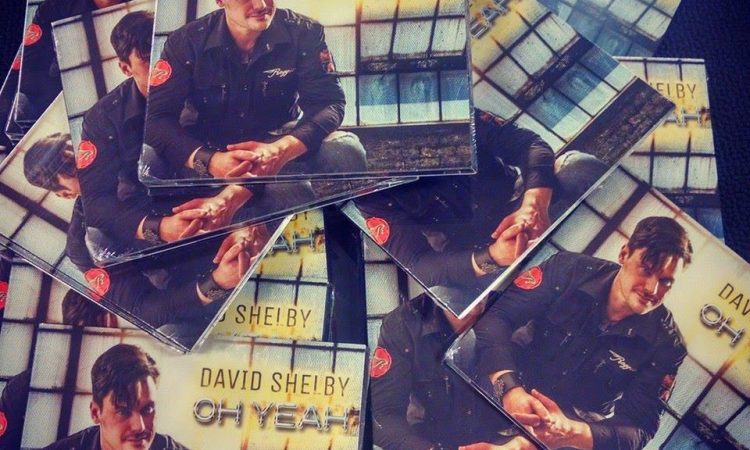 Highway South Records (Detroit, MI) is pleased to announce the forthcoming EP release from its flagship national recording artist, David Shelby.  Shelby, who has made great strides to carve his niche in the country music platform as a major indie contender, will introduce his sophomore recording project entitled OH YEAH.**  The six-song EP, co-produced by Russ Zavitson and Music Brothers Production [Teddy Gentry (of the country music super group Alabama) and Charles English], is set to be released November 4, 2014 and will be available via all major retail digital outlets.

Shelby is a performer “wired” for sound. The Detroit native’s musical talents are branded far and beyond his hometown roots and the current project is an absolute testament; OH YEAH highlights Shelby’s original groove-infused, gritty authenticity in his signature musicianship and storylines.
Shelby serves up a musical menu to cater to a “party-of-two” (with “Ride It Out”and “Feet”) or a full-house crowd (in the backwoods anthem, “Southern Drawl”).  The subtle, suggestive, and alluring sentiment of the title track, “Oh Yeah”(reminiscent of Conway Twitty’s “Tight Fittin’ Jeans”), rebelled by the undisguised, shameless blatancy of “Podunk” reveals Shelby’s ability to embrace his audience with varied emotions–contemplation, tenderness, revelry and hillbilly humor.

“Working alongside both Teddy Gentry and Russ Zavitson really brought out variations of who I am as a performer,” David Shelby introduced.  “It was an experience that pushed me to explore how diverse I could be, vocally and stylistically, while being consistent to who my fans know me to be.”

The well-versed EP is a composition of down-home country sound melded with country ruckus and drenched in Shelby’s trademark sound branded by the heart of America.

Like a finely manufactured automobile, David Shelby “delivers” with lyrical precision, production polish and a classic talent to hold his own as an American-made independent. A musical protégé whose talents were recognized early on, Shelby was invited to form an entire horn section for the The Wolfman Jack Fabulous 50s Tour at age 17. The ace trumpeter toured internationally with award-winning recording artists such as The Imperials, Stevie Wonder and Davy Jones [The Monkees]; he opened for Styx and Foreigner, and has played before sold-out crowds at some of the world’s largest venues such as DTE Entergy Concert Venue and First Midwest Bank Amphitheatre (formerly The World Music Theatre) in Chicago.  Shelby has shared the stage with Hank Williams Jr., Kenny Chesney, Eric Church, Uncle Kracker, Colt Ford, Jake Owen, Justin Moore, Lonestar, Craig Morgan and more among the ranks.

A scholar of music and a well-rounded composer/instrumentalist, David’s songs reflect his admiration for Nashville and the history of country music, the evolution of rock ‘n roll, and the rhythm and grooves that shout: “Detroit!” His latest recording project, OH YEAH, showcases Shelby’s ability to bring Detroit home in Nashville style as a seamless mix of both cultures.