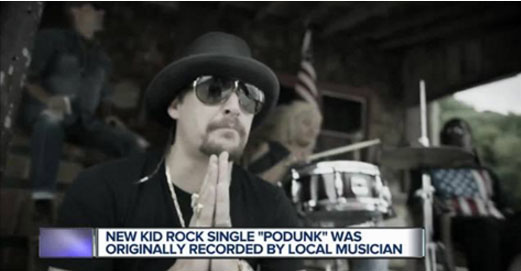 NASHVILLE, Tenn. (WXYZ) – Kid Rock announced last week he’s considering making a run for the US Senate. If his latest music video is any hint, then a campaign is already a done deal.

Podunk is a fun but edgy anthem saluting the people credited with shaking up the last presidential election.

The casting call for the video described the characters like this: “A variety of extreme character types – ‘rednecks’, ‘hillbillies’, “white trash”, “people of Walmart types” – crazy, fun, characters who aren’t afraid to get up to all kinds of no good and do odd off the wall activities.”

The song was written a few years ago by Nashville songwriters Tony Haselden, John Ozier and Walker Hayes. But Kid Rock’s version borrows heavily from a version recorded by David Shelby, a touring Nashville performer who grew up in Clinton Township.

“Oh I’ve been a fan from the start.” Shelby says of Kid Rock adding that he’s honored an artist of Rock’s stature choose to cover his version of Podunk.

“Frankly I thought the song needed someone like that to take it to the next level and when I found out Kid Rock was doing a version of it I was like ‘its perfect’”.